Amongst over 200 offshore islands in Hong Kong, Lantau Island is the largest island with a size of about 147 km2. The Island primarily consists of mountainous terrain, including the renowned Lantau Peak and the Sunset Peak; and has a long coastline which largely remains pristine. The unique landform on the Lantau Island and its surrounding waters provide diverse natural habitats, such as woodlands, shrubland, grasslands, streams, freshwater marshes etc. The upland area of the Island is one of the few places where remnants of the original forest cover of Hong Kong can still be found. With a wide range of natural habitats, the Island is rich in biodiversity and nurtures various rare and endemic plants, and animals of conservation values.

First discovered on the Lamma Island in 1952, the Romer's Tree Frog (Liuixalus romeri) is an endemic species. It is the smallest frog recorded in Hong Kong with a size of approximately 1.5 cm. It lives in moist leaf litter on the floor of well-wooded areas, and depends on temporary pools of water for breeding. Its light brown body colour and the distinctive dark “><” mark on the back provide good camouflage effect for the frog. The natural populations of the species are highly restricted and have only been found in Lantau, Lamma, Po Toi and Chek Lap Kok. With the successful implementation of a translocation programme to save the species from the development of the Chek Lap Kok International Airport in the 1990s, the current population status of the frog is considered secure. Nevertheless, the tiny frog is still susceptible to various threats and is one of the three amphibian species protected under the Wild Animals Protection Ordinance (Cap. 170) in Hong Kong. Fig. 1: Romer’s Tree Frog Liuixalus romeri; the distinctive dark “><” mark on the back of this frog species

Horseshoe Crabs are an ancient animal group, with the oldest fossils dating back to 475 million years ago. They are often referred to as “living fossils”. Amongst the four extant species around the world, two species can be found in Hong Kong, namely the Chinese horseshoe crab Tachypleus tridentatus and the mangrove horseshoe crab Carcinoscorpius rotundicauda. Horseshoe crabs normally spend their juvenile stage on intertidal habitats and move offshore to live in the sea as they mature. With a long coastline, Lantau provides several ideal sites which serve as important breeding and nursery ground for juvenile horseshoe crabs, including San Tau and Shui Hau. However, similar to other places around the world, horseshoe crab populations in Hong Kong are declining rapidly and their survival is continuously threatened by habitat disturbance and destruction, as well as different anthropogenic activities. Champion’s Rhododendron (Rhododendron championiae), one of the rarest native rhododendrons in Hong Kong, has been enlisted as a rare and precious plants of Hong Kong and is protected under the Forestry Regulations (Cap. 96 sub.leg). The species has a high ornamental value for its white or rosy flowers. San Chau on the northern coast of Lantau was designated as a Site of Special Scientific Interest in 1999 as it harbours the largest known population of the Champion’s Rhododendron which usually blooms in its tall hillside shrubland in spring. 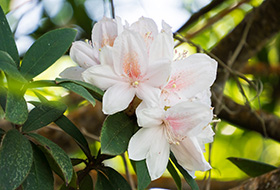 General introduction on country parks and marine parks in Lantau Fig. 4: Existing and proposed protected area system on the Lantau Island and in surrounding waters

Hong Kong has established a well-organized and efficient protected area system to protect our natural resources since the 70s. At present, about 40% of Hong Kong’s land area has been designated as country parks and special areas under the Country Parks Ordinance (Cap. 208) for conservation, countryside recreation and outdoor education purposes.

About 70% of the land in Lantau has already been designated as country parks, including the Lantau North Country Park, Lantau North (Extension) Country Park and the Lantau South Country Park. The two famous peaks, Lantau Peak and Sunset Peak, which attract thousands of hikers every year, are encompassed by the Lantau South Country Park. The undulating uplands and peak areas in the country parks offer picturesque panoramic views towards different directions of the Island, including the splendid coastline in the south and the Chek Lap Kok International Airport in the north on one hand, while preserving various important habitats such as natural streams and montane forests.

In addition to country parks, there are eight Site of Special Scientific Interest and two Special Areas in Lantau which were designated for conservation of important ecological resources of the Island.

To better conserve the marine environment of Lantau, the Government will continue to take forward preparation work for designating three more proposed marine parks, including the Southwest Lantau Marine Park, the South Lantau Marine Park and the Marine Park for the Hong Kong International Airport Third Runway System project. Such proposals will put a total of no less than 7,100 ha waters around Lantau under statutory protection. It is anticipated that in designating waters of important ecological value as marine parks, the marine habitats of Lantau could be further improved in the long run through active management.

As Lantau is endowed with a wide variety of natural habitats, rich biodiversity and species of animals and plants with conservation value, we attach great importance to its conservation. The Ecological Study for Pui O, Shui Hau, Tai O and Neighbouring Areas was initiated in end 2017 to evaluate the existing ecological situation of Lantau and to explore appropriate conservation measures.

We have developed a series of eco-log with interesting findings from our ecological surveys to showcase the biodiversity of Lantau and promote nature conservation to the public.

Visitors from the Sky